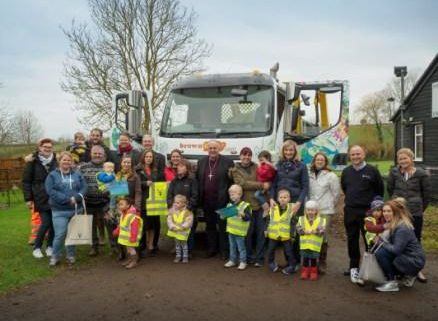 Two of our new skip lorries have this year been designed by local pre-schools, enabling us to involve even younger members of the local community in the design of our latest vehicles.  This is the first time that any of our lorries have been designed by pre-schools, previously they have been created by a range of primary, junior and senior schools.

Both pre-schools, Barton Stacey Pre-School and Longparish Little School, are situated near our A303 Enviropark.  The schools were approached in the summer to come up with designs based around the theme of recycling to go on the lorries.

Barton Stacey Pre-School had the idea of utilising their hands and feet to create posters, and Bishop David Williams of Basingstoke and other members of the local community, including all of the children’s parents came to see the unveiling of the lorry.

Bishop David presented certificates to each child whilst Tim O’Leary, Raymond Brown Operations Director, gave each of them a £10 gift voucher and goody bag.  Bishop David praised the efforts of Raymond Brown in involving the local community in the work which we do.  Longparish Little School had ten of their children draw pictures and colour in posters.

At both pre-schools, the children got to have a sit in the lorry and pretend to drive it whilst having their photos taken.  Many thanks to our Barton Stacey Pre-School lorry driver, Phil Cresswell, and our Longparish Little School lorry driver, Dave Newell.